Cultures and rituals are the icons of Jogjakarta. For the people here culture and rituals are important parts of their life. "Make the Ratha-yatra festival very great success. This will be a great introduction in your city and people will appreciate it" (SPL to Syamasundara, 4th May, 1967)

This year the art communities in Malioboro organized the Grebek Apeman Festival, pronounced apem-maan. Apem means cake and during this carnival different types of cake and vegetables are piled up like a mountain and later distributed to the vsitors. Grebek refers to the visitors who compete to get a piece of the cake from the cake mountain. Government authorities arranged the Malioboro Street, Jogjakarta for the carnival on 04 June 2016 to welcome the Ramadan 1437 H. By the mercy of Lord Jagannath the organizers approved the participation of devotees with Jagannath on chariot to take part in the parade. Then started the preparation.

The group of devotees who were supposed to arrive from Bali found that the train tickets were all sold out. Now who would cook for the devotees, decorations, kirtan? Everything seemed to be falling apart. Just at the last moment a group of devotees arrived by flight and after their arrival everybody got back their enthusiasm and the preparations resumed in full swing. A small test from the Lord.

After the remarkable ratha yatra festivals this year at Cilegon, Surabaya, Kuala Kapuas, Lombok and Jember, all devotees were bubbling with enthusiasm and vigor to once again chant and dance in ecstasy in the second ratha yatra of Malang. In Malang, like last year, the Percussion Festival provided the opportunity for our devotees to bring Jagannath Ratha Yatra to the carnival parade. Immeiately after the Ratha Yatra at Surabaya, the chariot along with Jagannath, Baladeva and Subhadra arrived at Malang. The altar for the deities was arranged in the lobby of Police mess. Preparation started early in the morning. Everyone was very happy and jubilant. Some devotees were arranging garlands, some serving prasad to the devotees, some distributing books and a team of devotees were reassembling the parts of the chariot. Others devotees prepared the prasadam in Bhaktivedanta Namahatta, Codo, about one hour from the location of the chariot.

For distribution to the general public 1 tons of oranges arrived, sponsored by Dina Dharini mataji, which was offered to the Lord. Balinese and bharata natyam dances were performed by the devotee girls to open the ceremony. Speech was given by the leader of Malang Hindu Parisad, that he really appreciated the festival. Short class about the origin of ratha yatra was given by HH Kavicandra Swami Maharaj. A recorded lecture from HH Subhag Swami Maharaj covering Jagannatha's pastimes, Prabhupada's instructions and personal sadhana to remain fixed up in Krsna Consciousness was translated by Sachi Putra prabhu. Taking the opportunity, H.H. Kavicandra Swami Maharaj presented a mahaprasad flower garland to Mr. Moch Anton, the mayor of Malang. Behind the kirtan team followed a group of dancing gopis all dressed in beautiful Vedic attire attracting the attention of many. Then arrived the chariot of Jagannatha beautifully decorated with an abundance of flowers, with its effulgent golden yellow dome shining brightly in the night. Even though most of them belonged to other faiths they also joined in to sing the Hare Krishna maha mantra. This was quite an inspiration for the devotees who had one more ratha yatra coming up at Jogjakarta.

In Jogjakarta the preparation for the chariot was done at the Kepatihan complex. Because of the limited of devotees, the committee of the ratha yatra divided the devotees into some groups. Every group had their on duty from cooking, making garlands, decorate the chariot and packed the prasadam that would be distributed to the devotees and people on the ratha yatra. The preparation finished At 16.00 pm. Jagannath arrived from Bantul and so did the group of devotees from Narayana Smrti.

The special guest who came to the ratha yatra was, Mr. Ida Bagus Wika Krishna, Director of Hindu Society and counselor Jogjakarta. The hindu parisad of Jogjakarta also came to the festival. They were happy to participate in the ratha yatra. The melodious bhajans were sung by devotees before the ratha yatra ceremony started. They were received warmly by the devotees. After arati the guests offered coconuts to the Lord to invoke auspiciousness. Then the chariot was pulled to the place where other participants were already waiting.

The sun began to set and Malioboro Street became crowded, and the hot bhajan lead by Sundar Gopala brahmacari flooded the air with the melodious Hare Krishna Maha Mantra. Many visitor stopped by the chariot and took pictures of the chariot which was decorated with many lamps. At 19.00 the parade was started. One by one the participant passed in front of Lord Chariot as if they presented their performance for the Lord. When the time for the Lord entering the Malioboro street some how many people came to hold the rope of the chariot and pulled the chariot along the street. It was like Jagannath Puri Ratha yatra where people very crowded around the Lord's chariot. The group of gopis dancer danced greacely in front of the chariot. The melodious powerful kirtan were sung by devotees along the ratha yatra that invited many people to sing and dance with the devotees. As Srila Prabhupada wrote in his letter "And if there is chanting of Hare Krsna, even the soul is there for a short time, Oh! he will hear and become advanced. This sound vibration is not material, it is spiritual and powerful beyond our conception. So it cannot be hindered in any way by something material; it surpasses all these material barriers". (SPL to Mukunda and Janaki, 28th February, 1968.) Two devotees also dressed as Hanuman and Jatayu attracted many visitors and took pictures with them. When the chariot arrived in front of the stage of honour, more people crowded around the chariot. When other participants turned left in the front of the stage, the Lord chariot went straight to the Alun-alun Keraton. The ratha yatra finished at the East side of Alun-alun Utara Keraton Jogjakarta. Everyone was happy and felt blissful participating on the ratha yatra.

Million thanks to our devotees who tirelessly worked to make the ratha yatra successful. We offer our obeisances to HH Kavicandra Maharaj, GBC Indonesia, who took out time to be with the devotees inspire them. Abundant Thanks to HH Ramai Maharaj also. HH Srimat Subhag, has always been inspirational to the ratha yatra team, Indonesia, and most importantly, for linking up our lives with Jayananda Prabhu. Jai Srila Prabhupada. 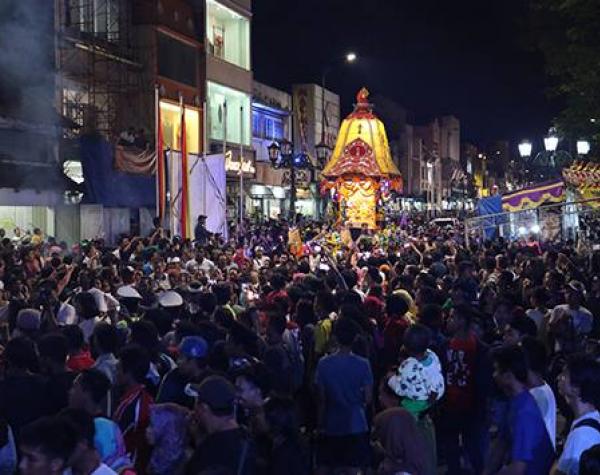