Always Engage in Lord's devotional service is the prayer of every devotee utter to the Lord. In every circumstance, devotees beg that they could serve the Lord. As Srila Prabhupada mention in his letter that "Simply pray to Krsna that you may be able by His grace to serve Him nicely. Our prayer of the Hare Krsna mantra means addressing Radha and Krsna for being engaged in Their service. Hare Krsna means, 'O Hare, O Radharani, O Krsna, please engage me in Your service so that I can get relief from the service of maya.' (SPL to Subala dasa, 8th July 1969). Lord Krishna will answer every humble prayer of His devotees. Devotees in Indonesia got their prayers answered.

"Krsna will be pleased to shower His blessings upon you. He is very kind to sincere souls, and He gives intelligence from within to sincere devotees. We require only to become sincere in the service of the Lord, then everything is there ready for our convenience." (SPL to Jaya Govinda, 8th February 1968)

The massive combined Jagannatha Ratha yatra in three in different places of Indonesia made the devotees think of no other thing except how to make the ratha yatra success in any circumstances. All the three Ratha yatra was done on the same day in Probolinggo, East Java and Lampung, August 29, 2016, and within less than a week, September 4, 2016, the devotees also did Ratha yatra in Jember East Java.

Rata yatra in Probolinggo was done in commemorating the Independence Day of Indonesia. The government always invited the devotees to participate in the cultural parade. The devotees also prepared the parade nicely. The chariot was decorated with beautiful flowers. A ton of oranges was prepared to distribute to the people in Probolingnggo who were lucky seeing the Lord in the parade. Devotees who stayed in Bali, Lombok and another part of Central and East Indonesia came to Probolinggo by bus. The parade started at one in the afternoon when the sun was slightly over the head. This time, devotees also observed Ekadasi Vrata. The Hare Krishna Mahamantra filled the atmosphere and the graceful movements of the dancers captured the eyes of the people. They were joyful to see and received the maha prasadam. The hot weather made some dancer collapse on the parade. They could not stand of the heat of the sun, but they were still enthusiastic to participate in the parade until the finish. Arriving on the finish line the devotees honored prasadam and they took rest and some of them talked about the Ratha yatra. Meanwhile, hundreds of kilometers to the west, exactly in Lampung devotees also have a stunning Ratha-yatra. Devotees in Lampung prepared the parade joyfully. This was the second rath yatra in Bandar Lampung city, the capital city of Lampung. The parade attracted a lot of crowds of people. The Ratha yatra was started by offering bhoga to the Lord and then coconuts were offering to invoke auspiciousness and also as the sign that the ratha yatra was started. The devotees then started to pull the chariot of Lord Jagannatha.

Jagannath went to the main road of Lampung where many people already waiting. Like a great parade of the Lord in the past, two elephants led the parade. It was entering the pastime protocol of the Lord in past. The elephant, army and girls with special ornament and the last the Lord on the chariot pulled by the devotees who sang and dance in front of the chariot made, it looked like another place beyond this world. After an hour's parade, the chariot arrived in the finished line and devotees sang a prayer of Narasimha Deva for the protection given.

A day after Ratha-yatra in Probolinggo the social media group was surprised by the news that there would be ratha yatra in Jember on September 4, 2016. It made all devotees exited. They started to collect donation and the Adiprana prabhu as the coordinator of transportation organized 2 buses for the devotees and within a short time, all seats were sold out. Srila Prabhupada stated in his letter that "The faith increases in Krsna consciousness by our voluntary increase of serving Krsna. Serving Krsna is unlimited and He can accept our unlimited service, and award us unlimited transcendental pleasure in the unlimited service of the Lord. That is the meaning of unlimited." (SPL to Brahmananda, 20th February 1968). A day before the ratha yatra the devotees headed to Jember. The devotees arrived in Jember in the morning. The preparation was made. The pujari dressing the Lord, the other devotees decorated the chariot. This time, the chariot was new. A fire sacrifice was made to purify the chariot and also for the success of the Ratha yatra. The Ratha yatra was done in the district of Umbul Sari. The devotees joined with the local community to participate in the euphoria of the Indonesia Independence Day. The devotees pulled the chariot for about 5 kilometers. Along the parade line, both sides was full of people. The devotees sang Hare Krishna Mahamantra along the parade. The gopis dancer danced in front of the Lord's chariot for the satisfaction of the Lord. Some devotees distributed prasadam and a group of book sankirtan distributed Srila Prabhupada book. The sky was clear and no cloud hang in the sky, it made the weather so hot. But the heat of the sun could not fade the spirit and the cheerfully of the devotees. Arriving at the end of the parade the devotees got glasses of fresh guava juice. Then they returned to the temple in Jember. Finishing their noon activity the devotees then honored prasadam before returning to Bali with a blissful feeling.

"I am so much satisfied with your successful performance of Ratha-yatra festival and I am awaiting to see similar festivals in all our other centers, including one in the prospective London center." (SPL to Gurudasa, 16th July 1968)

We would like to take this opportunity to thank HH Bhakti Raghava Swami for his blessings and encouragement which were so essential for the devotees. Our ever grateful obeisances are due to HH Kavichandra Swami and HH Ramai Swami, the GBCs of Indonesia, for their support and guidance to always looking for new avenues for sankirtan. Our humble obeisances to HH Subhag Swami for always reminding us of the importance of the Sankirtan movement of Mahaprabhu and inspiring us with the dedication of Sriman Jayananda Prabhu, for bringing us closer to Srila Prabhupada and keeping us united in a family of ISKCON. Our gratitude to all Lampung devotees, Probolinggo devotees and Jember devotees who worked hard for the success of the festival. 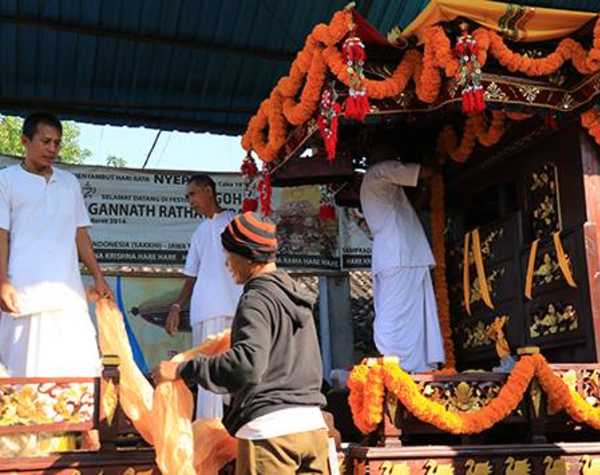