Banyuwangi is located in East Java and also known as 'The Gate of Java' and the 'Festive City'. There is always some sort of event taking place, whether it be cultural parades, fashion shows or water sports. The oldest and most popular festival in Banyuwangi is known as 'Kuwung,' a public parade conducted by the Government. Visitors across Indonesia gather to participate in this festival. The annual parade took place on the 5thof December 2015.

In Banyuwangi there is a small temple presided over by Their Lordships Sri Sri Krsna Balarama. When Subhag Swami Maharaj visited Banyuwangi earlier in 2015, he instructed the devotees to try and organize a Ratha Yatra festival. Unfortunately, there are not many devotees who stay in Banyuwangi and those who do are in a mature stage of their lives, thus to prepare for the Lord's chariot festival would be hard work. Nevertheless, they endeavored to find a way to somehow or other hold this festival. After a long struggle, 'a silver lining in the sky' appeared in the form of the annual 'Kuwung' festival. This public parade allows all communities in Banyuwangi to perform and display 'their acts', with permission from the Government. Local devotees Vasudeva Krsna das and Sandhya Avatar das sent forth a proposal to the 'Kuwung' festival committee for permission to hold a Ratha Yatra festival. Permission was granted for the devotees to participate and they immediately started to make arrangements. It was most definitely the Lord's mercy upon the residents of Banyuwangi that He would shower His merciful glance upon them all.

"Nothing is impossible for the Supreme Lord, but all His actions are wonderful for us, and thus He is always beyond the range of our conceivable limits" SP SB 1.8.16 Purport

Once devotees in Bali heard the news they also started to make provisions to head over toBanyuwangi. Many reached the day before the festival along with their families. From Bali, Banyuwangi is only a 3 or 4 hours drive. Jagannath, Baladeva and Subhadra devi made Their way from ISKCON Jember to Banyuwangi around 5pm. Devotees from Java also came to help out in the festival. They passed the whole night joyfully cooking, making garlands and decorating the chariot.

The devotees in Banyuwangi received help from the local 'Hindu Parisad'. The Hindu Parisad leaders were overjoyed when they heard about this upcoming festival as it was a chance for them to publically display some aspects of Hindu culture. The Hindu Parisad committee also lent a hall for the devotees to use as a token of gratitude.

"So this Ratha-yatra festival is one of the items of our preaching work." SPL to Tamala Krsna, 19th July, 1970.

The next morning, Jagannath, Baladeva and Subhadra devi were beautifully dressed by the pujaris and adorned with a variety ornaments and fragrant flowers. At 11 am devotees gathered in front of Their Lordships and arati was performed. Around 300 local Hindus participated in the procession and sang along with the devotees. Chief Guest Atmanivedana Swami gave short class about the origin of Ratha Yatra, followed by a recorded class by Subhag Swami Maharaja, translated by Gadadhara das. All devotees were very much enthused and inspired after the classes and ready to give it their all in the parade for Jagannath's pleasure. Their Lordships' made Their way to the chariot and arati was performed by Atmanivedana Swami. Ecstatic kirtan was sung until 5pm where the chariots were pulled to the local fields, the starting point of the parade.

The official starting time of the parade was 8pm. The Government performed formal ceremonies and the Lord's chariot was on its way. Devotees performed a short drama based on the war at Kuruksetra, which was thoroughly enjoyed by Guests of Honor including the Mayor of Banyuwangi. Around 600 devotees pulled Lord Jagannath's chariot. On behalf of the committee, Atmanivedana Swami presented the Mayor a copy of the Bhagavad Gita and a flower garland offered to the Lord.

"For the present you endeavor to make Ratha-yatra festival grand and successful. You should arrange the procession and procedure so nicely that all the neighborhood people may be attracted to join the procession." (SPL to Upendra, 1st June, 1968)

From the starting point of the parade until Blambangan field, there were large crowds that chanted and danced enthusiastically with the devotees. The kirtan party led by Premadhana das sang the mahamantra melodiously for 2 hours enchanting all. One ton of oranges, which was kindly sponsored by Dinadarini devi dasi was distributed to all throughput the course of the parade. Although the stock of oranges had run out, many came back requesting more of Jagannath's prasad. A beautiful rasa dance was performed by devotees led by Mahapavitra devi dasi which added a special flavor to the event. After the parade had finished, the Lord made His way to the Hindu Parisad hall.

"I am so pleased to learn how the crowds gave their attention to your street play. This is transcendental entertainment. And to distribute prasada sumptuously to the crowd is strictly in our Vedic tradition." SPL to Madhudvisa, 14th April, 1970)

This Ratha Yatra was tribute to Sadhu Jivana Prabhu, a tireless devotee, a good friend, whose paintings adorn Radha Krsnacandra temple in Manipur and every Jagannatha ratha is complete because of his paintings.....above all his hard work made so many of us smile blissfully...He made Srila Sripad happy, Srimat Subhag Swami is always pleased with him, definitely Srila Prabhupada is happy with him and surely Jagannatha is happy with him. He made all of us smile to see Jagannatha Ratha yatra in so many places of Indonesia....Maharaj Kavichandra, Maharaj Bhakti Raghava and Ramai Maharaj. All of us owe so much of our bliss to Sadhu Jivana Prabhu who was left his body a week before this ratha yatra in a hospital in Bali, Indonesia. Srimat Subhag Maharaj uttered a prayer for him, "My dear Lord, please be merciful to Sadhu Jivana prabhu so that he can continue to serve you." In Maharaja's words...'he is a wonderful devotee, you can chant extra rounds for him.'

We would like to take this opportunity to thank HH Bhakti Raghava Swami for his blessings and encouragement. Our respects to HH Kavicandra Swami and HH Ramai Swami, the GBCs of Indonesia, for their support and guidance to always look for new avenues for sankirtan. Our humble obeisances to HH Subhag Swami for always reminding us of the importance of the Sankirtan movement of Mahaprabhu and inspiring us with the dedication of Sriman Jayananda Prabhu, for bringing us closer to Srila Prabhupada and keeping us united in family of ISKCON. We thank the leaders of Indonesia Hindu Parisad for cooperating with the local Banyuwangi devotees. Finally, we would like to express our heartfelt gratitude to all devotees who worked hard for the festival and ensuring that it was a success. 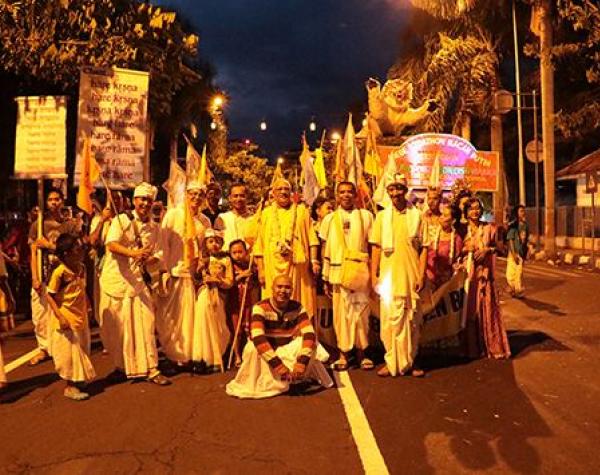 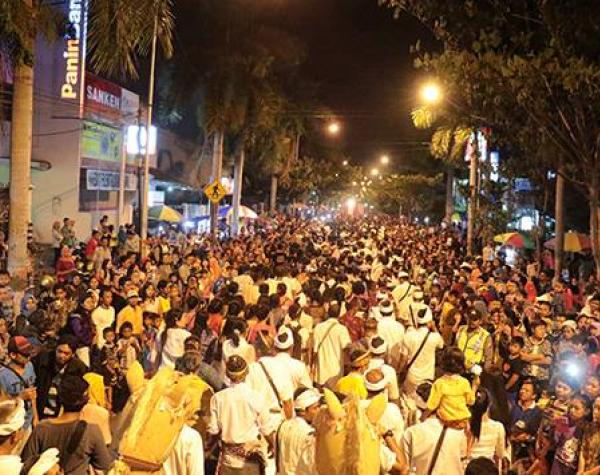 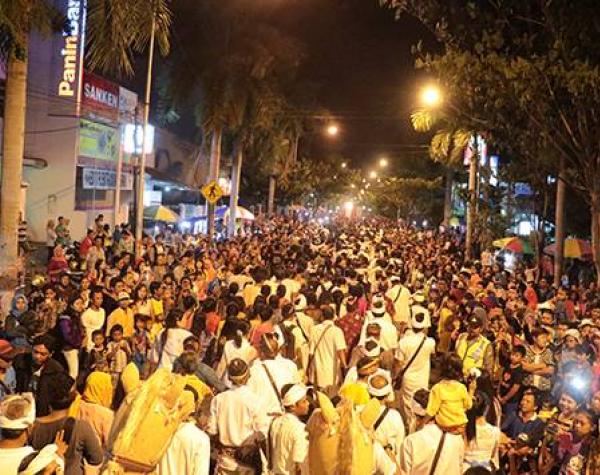 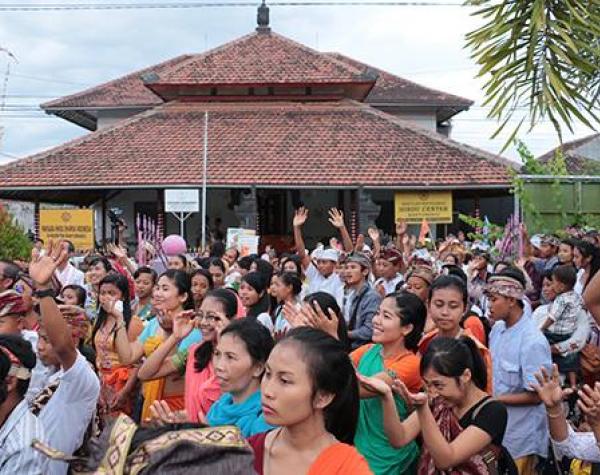 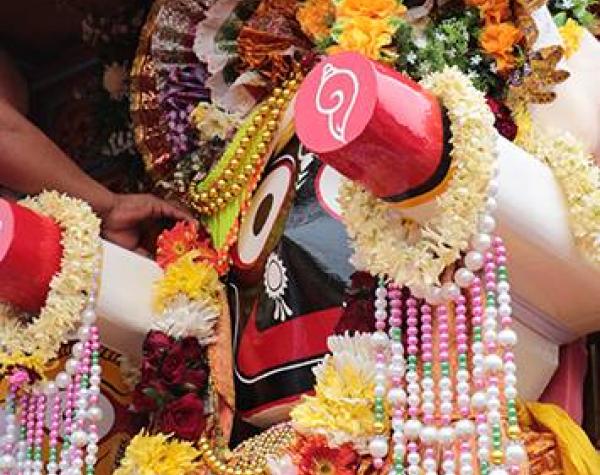 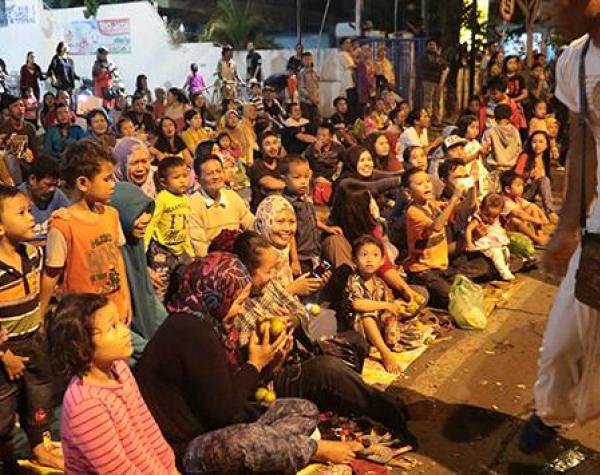 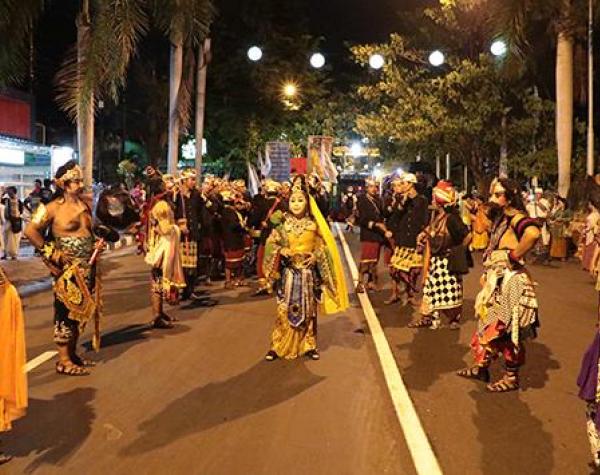 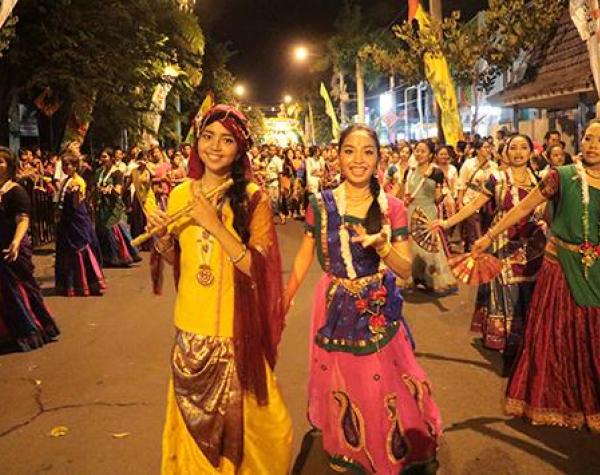 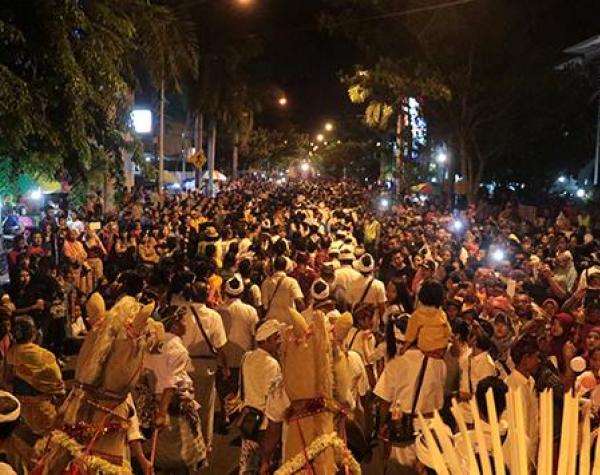 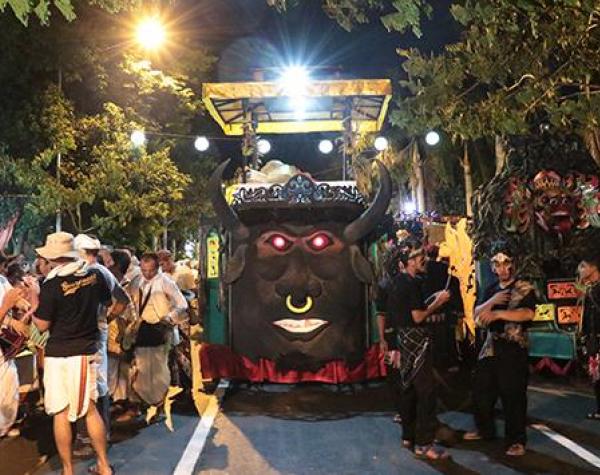 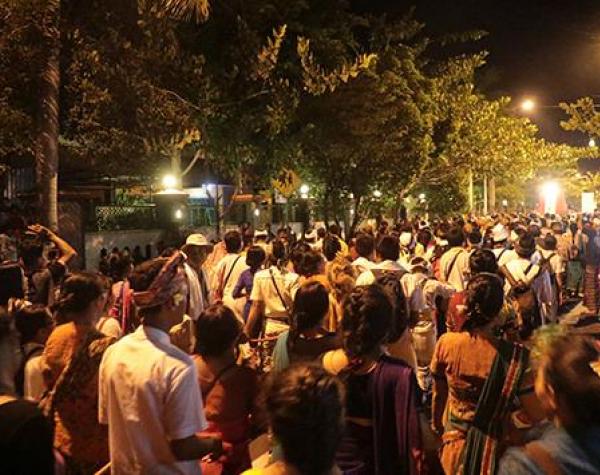 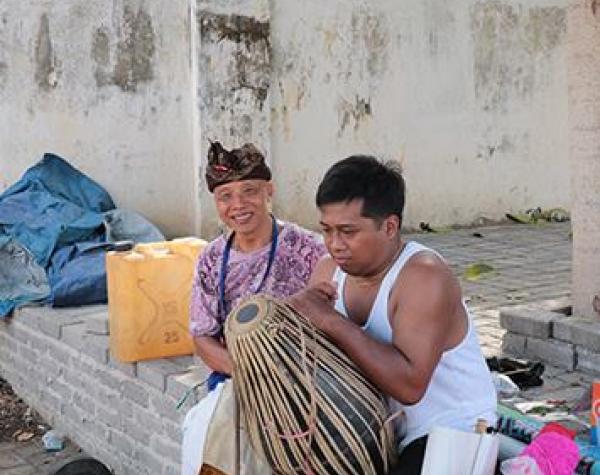 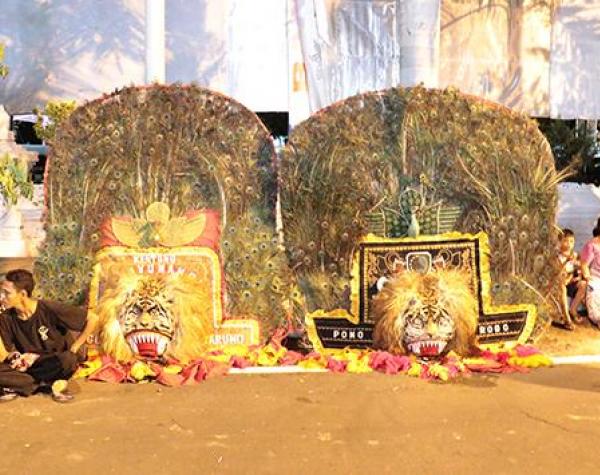 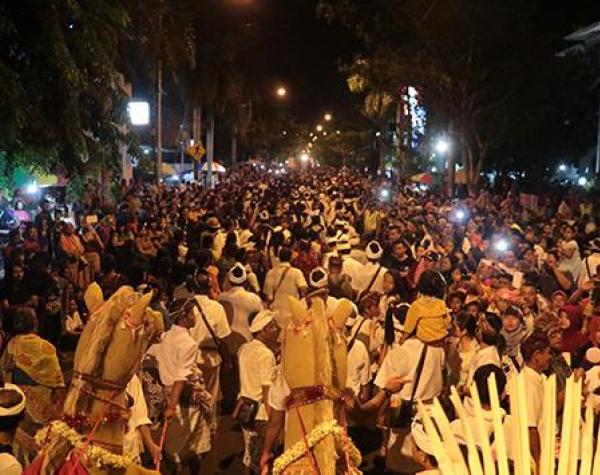 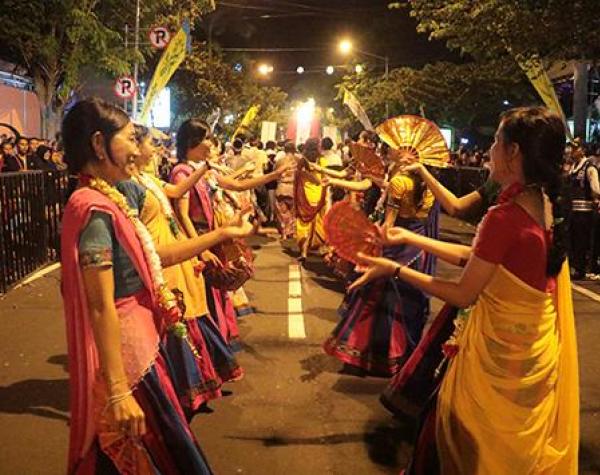 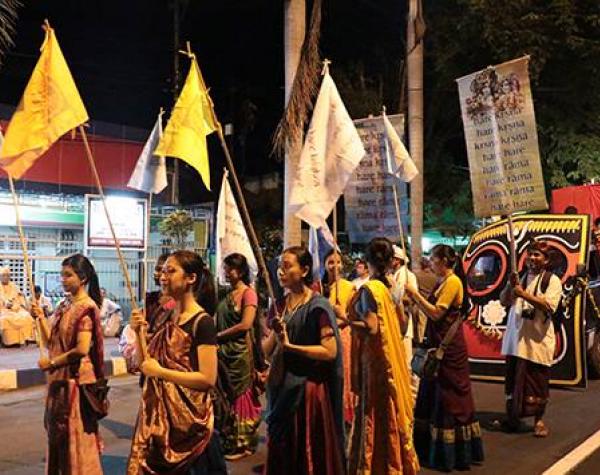 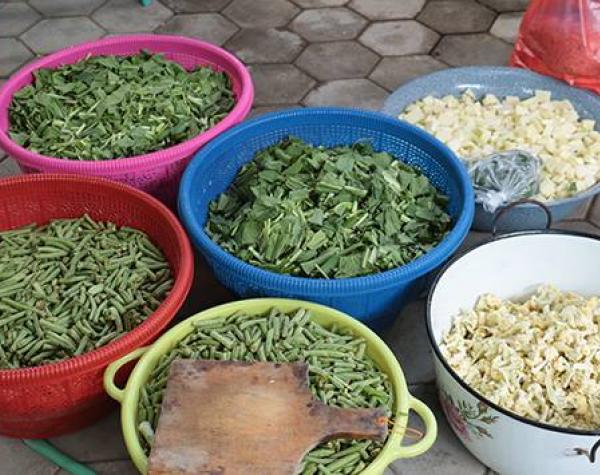 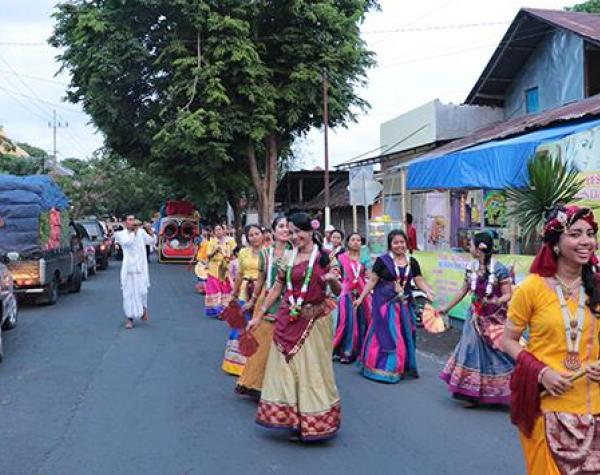 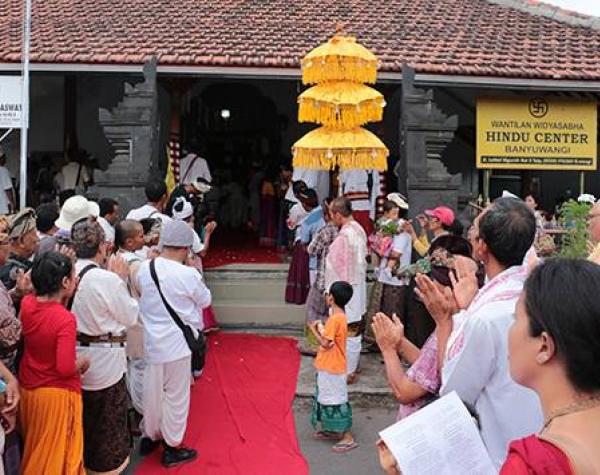 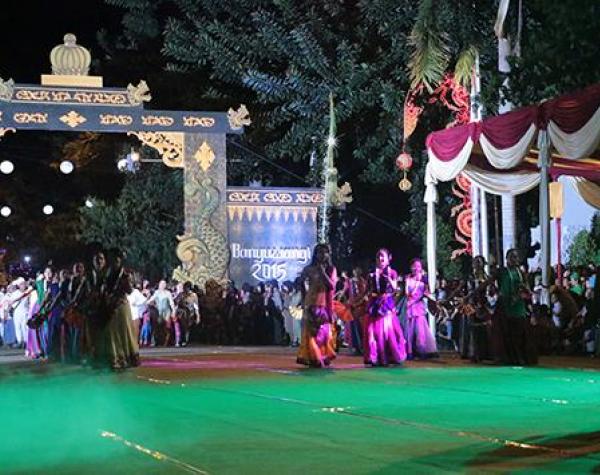 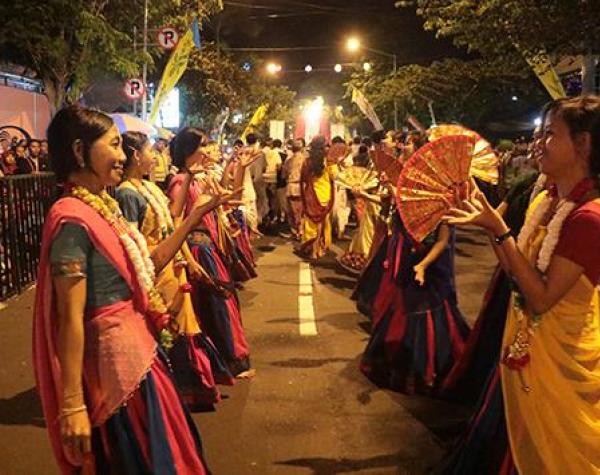 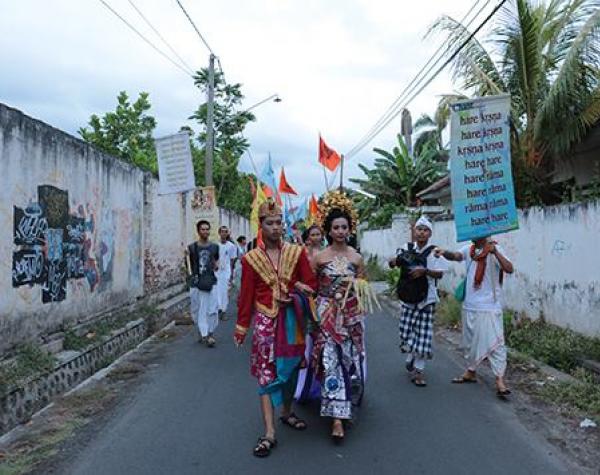 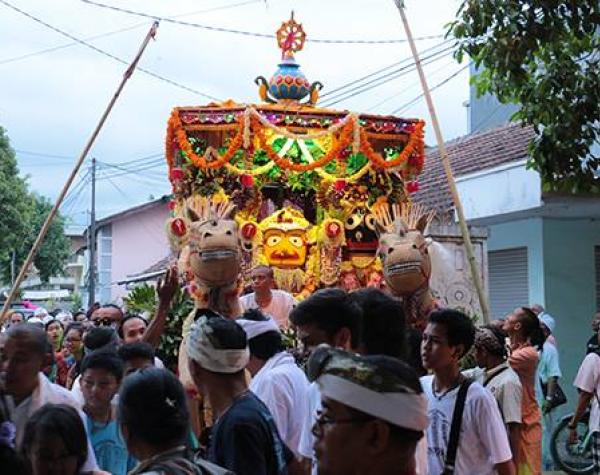 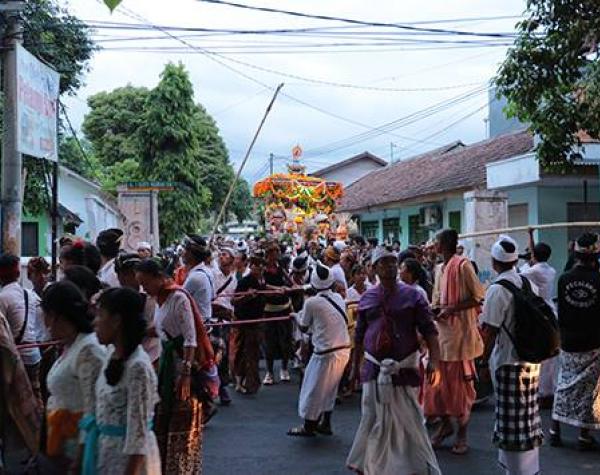 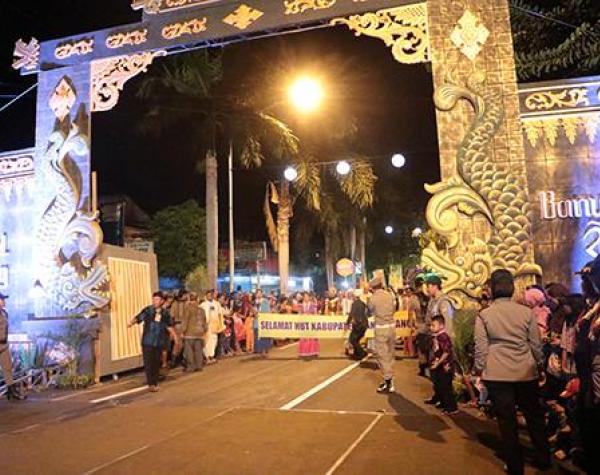 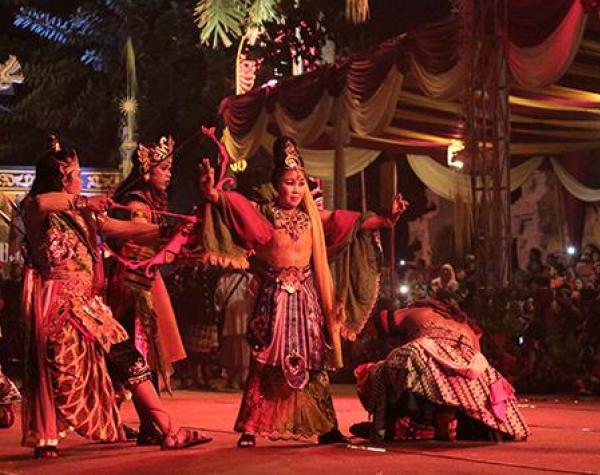 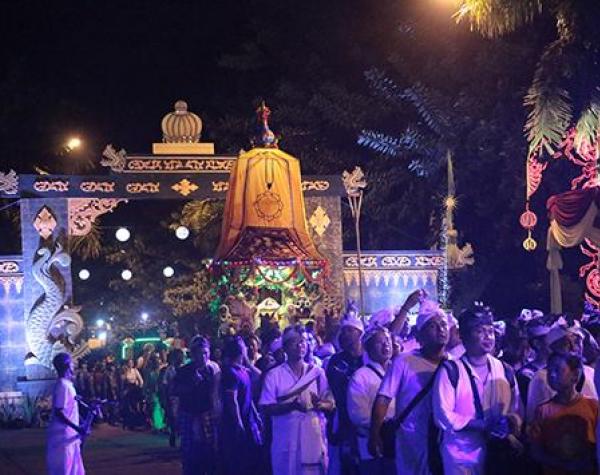